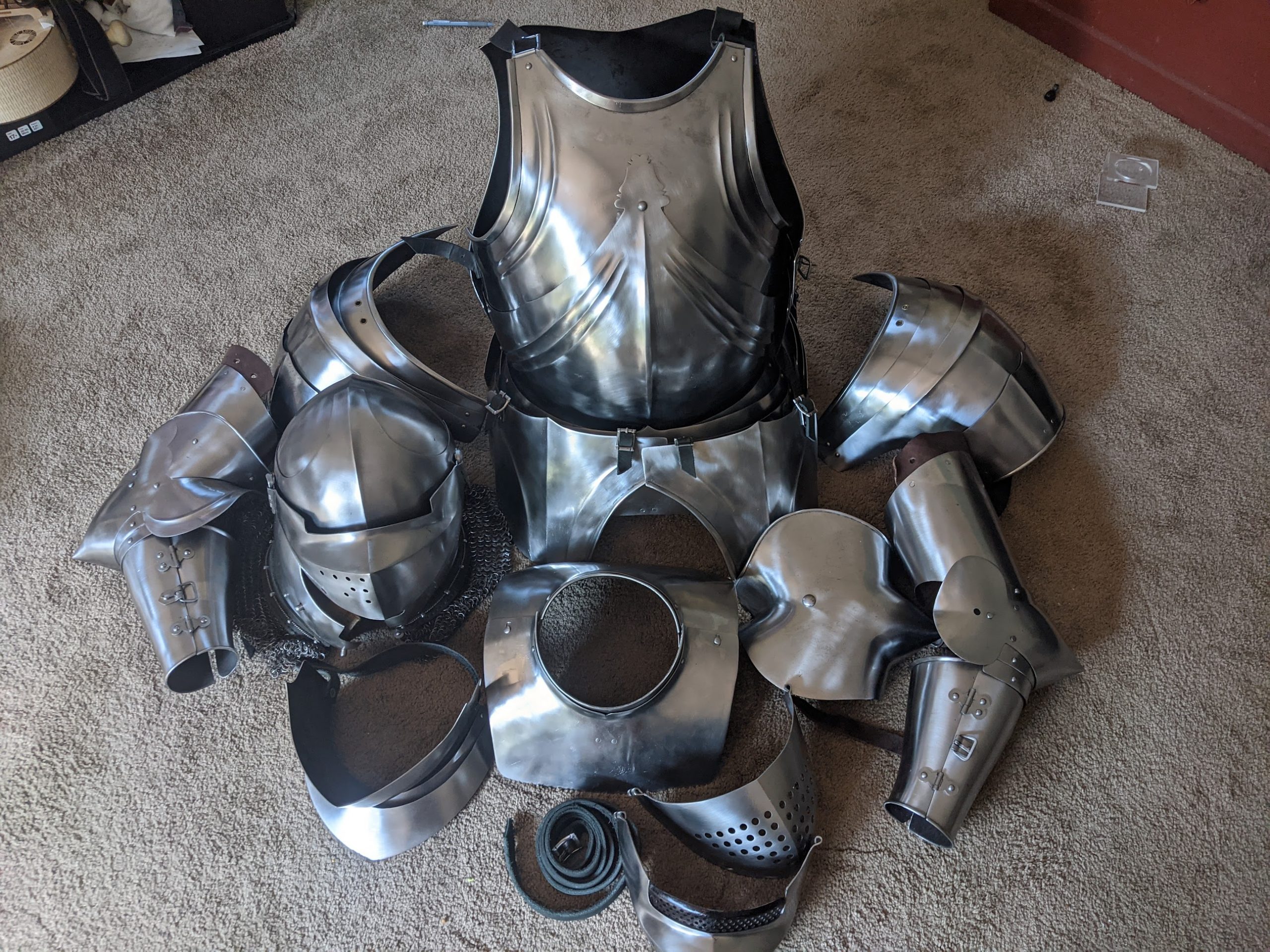 This essay is primarily focused on later period, European, full plate armor. In my case, late 15th century. As some of you know, I am the happy owner of a new suit of armor. I had Arma Moskovia make me a reproduction of this composite suit in the Metropolitan Museum in NYC.

I know it is considered “franken armor” by some experts. It is a composite outfit, meaning, by definition, some parts are from different times or places than others. It is hotly debated just how much armored fighters historically mixed and matched. I am of the opinion that a common armored fighter would use whatever parts he could get and sometimes parts needed to be replaced. Not all armored combattants had the cash to have a complete suit made by one armorer in one style all at once. What convinced me of this is the foot armor of Claude de Vaudrey. (shown below)

de Vaudrey’s armor here is shown to not only have asymmetrical arms and gauntlets, but these parts seem to be of different styles entirely.

So back to my armor.

In the 3 years since I began the project, I lost weight and switched from a padded gambeson to an unpadded arming coat. As a result the new armor is a little big on me… except for the helmet.

The first parts I got were the (full) legs. They fit perfectly. The day I received them, I ordered the rest of the suit.

Fast forward two years (thanks, COVID!) and the rest arrived. The chest was too wide. Probably my fault. The gorget was too big. Definitely my fault. And it didn’t fit to the helmet. My neck is only so long. The MET photos show a mannikin with a rather extra long neck… And the helmet fit well enough, but left almost no room for the padding I am used to in my helmets.

So I have some work to do.

The cuirass is heavy. It is made to be used in full contact sports including both melee and (hopefully) jousting. I will be wearing it in melee as soon as I feel safe with it and I have a much longer goal of jousting. (What kind of jousting? I haven’t decided yet.)

It is also somewhat too large on me. I have used ratchet straps to take in the chest armor. It is a long, slow process I don’t want to mess up. The armor is spring tempered, so it isn’t an easy process. It is getting to where it needs to be. A few more sessions and it should be perfect. The important part is to bring the arm pit opening closer to my body so I have better movement.

The arms are pretty dialed in. Again, for being made for full contact, they are over-protective. Their design is a little restrictive in the movement, but that is expected in the design. The left elbow cop has a reenforce that is removable. If I end up doing pole arm duels, I’ll add it in, but it is mainly for jousting.

The helmet is beautiful. I love the look of armets. They are meant to fit closely, so this makes padding them a problem. They are designed mainly for jousting and so they deflect blows from the front extremely well, second only to the “frog-mouth” helms made almost exclusively for heavy jousting.

The helmet came with a short, extremely finely made aventail and basic padded linen liner. Since there isn’t much room for more padding, I opted for the best anti-shock padding I could find – SHOCKtec gel. Normally, I use SHOCKTec Air2gel which provides excellent protection and less weight. With the gel, I get better protection and more mass. Adding mass to the helmet is not a bad thing in this sport. A helm with more mass absorbs more of the impact and your head is jolted less.

At the moment, I am using the original quilted linen liner parts that the helmet came with. They are well made and very comfortable. I MAY at some point, make a suspension liner for the helmet, in the style of the one in S20 armet from Churburg.

In the mean time, the priority with the helmet is to get it to sit right with the gorget. I mis-measured the gorget the first time and I’m waiting for Arma Moskovia to remake it.

The aventail is attached front and rear with hooks. They catch on everything. The original had buckles and straps. I may make that change back to the original.

Fifteenth Century armor is a lot. It takes a lot of tweaking to get it to fit right. When ordering over the course of three years and opposite sides of the planet, it helps to have an in-person fitting. Get one if you can. It’ll be worth it. But if you can’t, good luck. You’ve got a lot of work ahead of you.

In the long run will it be worth it? I think so. I can’t wait to look like a million florins strutting out on the field in shiny plate. It just takes a bit of work to get to that point. It is a work in progress here.